"Selling, Art or Science?" by Jim Holden on ChangeThis.com

Posted on Thu, Jun 14, 2012 @ 3:55 PM
800CEORead recently published this manifesto by Jim Holden on ChangeThis.com.
Click the cover image or link below to be directed to ChangeThis.com where the PDF can be downloaded.

“Having been in the sales training business for more than 30 years, we have seen all manner of sellers; strong performers, average sellers, and those who just don’t make the grade. But behind all of this has always been the debate as to whether sales is an art or a science, almost to suggest that for some, sellers are born and not made."

Having been in the sales training business for more than 30 years, we have seen all manner of sellers; strong performers, average sellers, and those who just don’t make the grade.  But behind all of this has always been the debate as to whether sales is an art or a science, almost to suggest that for some, sellers are born and not made.

Let’s look at what we mean by “art.”  For us, art is an expression of one’s imagination and talent.  It may result in a painting or sculpture, or it could be a wonderfully designed building, or something as intangible as an ingenious strategy to defeat a competitor, in order to win an important deal.  Or is it?

Artistic ability is generally considered to be innate; coming from within an individual.  A person is simply born with it, suggesting that if you’ve not been born with it, don’t expect to paint like a Picasso.  In addition, such talent is difficult to understand and explain - we see the result of talent, but not the talent itself.  Who can say what was in Picasso’s mind when he revolutionized European painting and sculpture with something like Analytical Cubism, an example of which is the following.

Science, on the other hand, is quite different.  It seeks to systemically organize knowledge in a very reliable way that can be repeated and predicted.  So, if you hold a tall glass of beer above your head and let go, the result is predictable, not to mention, tragic.  As such, science seeks to eliminate all unknowns, precisely explaining cause and effect relationships in the natural world.  But, the laws of physics do not apply so neatly to people, their abilities, and actions.  And so, we must rule out sales as a pure science.  At the same time, if you are able to define the intangibles of selling, the stuff that people generally don’t see, but know exist, perhaps we can move away from the view that selling is totally innate in nature.

For example, let’s take into account How to Run a Successful Customer Meeting.  There are two aspects to conducting a successful customer meeting, the tangible and the intangible.  On the tangible side, we know that a successful meeting requires the right process, which is shown in the following checklist: 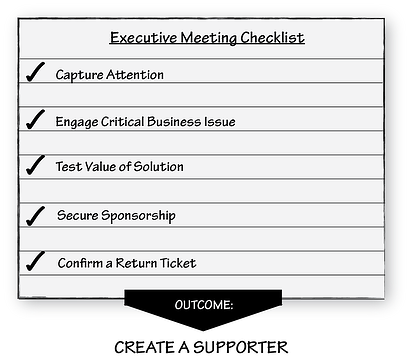 On the intangible side, a successful meeting is as much about managing emotions, as it is about implementing good process and conveying information.  High performing sellers know that productive conversations are actually less about what they say or what they think the customer individual has heard, as they are about how the executive feels at the end of the meeting.  Will he or she support the seller and a particular solution with enthusiasm?  Will the executive be indifferent or perhaps feel challenged?  Sensing emotional reactions, reading them correctly, and responding appropriately in real time are essential to executive meetings.  To accomplish this, sellers are trained to observe carefully, ask the right questions, and excel at listening.  The same could be said for giving presentations that are both informational and powerful.  Sellers don’t need to understand the psychology that drives emotional response, but instead need to know what to look for and how to respond to what they see.  So, in this example, selling, while not pure science, is also not entirely innate, as in an art.  But where does that leave us?  The answer lies with a new perspective on selling, which views it as a management science.

Holden has developed a Four Stage Model that addresses key factors (intent, focus, relationship, value and knowledge) within a context that describes the customer and competitive environments.  True to any management science, it enables sales proficiency to be documented, measured, understood, and managed.  This in turn, increases sales proficiency, consistency of performance, and scalability within sales organizations. Success is based upon both tangible and intangible factors. These factors approach art and science, sales as a management science conceptually sits in between them bridging the gap.